After attending a class at the Melton Community House  Lynne found that after two and a half hours  that not only did she enjoy the class but was very pleased with her work and the praise she received by the teacher. After classes ended she did several paintings at home. A few years went by and after Lynne retired and moved to Northern Victoria,  she joined the newly formed U3A where a few of the members were artists and Lynne became good friends with one of the artists and convinced her to conduct an art class at U3A. It worked out really well and many people joined the class. From there her love for pencil drawing started and is still her favourite medium. Lynne has done other classes in acrylic, pastel and more recently watercolour. 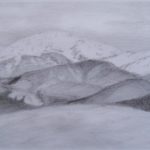